AWARD FOR BEST BRAND TO THE THERMO KING COMPANY 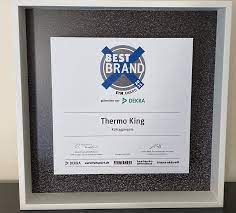 Prestigious recognition to Thermo King, a leader in refrigerated transport, which received the coveted "Best Brand 2021" award in the "Refrigeration Units" category for the 17th consecutive year during the ETM Awards.
This important award ceremony took place in Germany and is organized by a publishing house that deals with publishing specialized magazines in the sector; then a jury of journalists and readers who cast their vote in 25 different transport categories.
Refrigerated transport played a really essential role during the pandemic, because it worked constantly to meet an ever increasing demand for always fresh and frozen products by delivering them to supermarkets and other facilities or directly to their homes for people who especially could not move from. house because subjected to quarantine.
When it comes to transporting temperature-controlled products, however, we are not talking only about food, but also about drugs and as we said Thermo King, for example, has carried out and continues to perform numerous services in the transport of blood tests of subjects affected by Covid. -19, as well as played and plays a fundamental role in the transport of vaccines that traveled on trucks in truly polar temperatures. Suffice it to say that Pfizer requires temperatures below 80 degrees and on the eve of the monstrous vaccination campaign that affected the whole world it seemed an impossible operation, but Thermo King has fully satisfied the needs of customers with sustainable services also from the point of view. from an environmental point of view.
During the awards ceremony, other prestigious awards were awarded such as "Best truck" assigned to the Man TGX and the new Peugeot e-Expert as "Best van".