THE FULL ELECTRIC VERSION OF FORD TRANSIT IS COMING 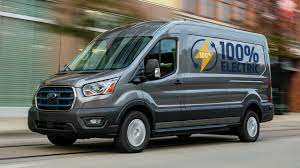 The fully electric version of the famous vehicle, which made Ford´s commercial history, will arrive in the spring of 2022; in fact, the new Ford Transit "full electric" model is about to come out with truly exceptional technological innovations such as a range of 350 km and a modern connectivity system.
Ford E-Transit is a 100% electric vehicle and is for the moment subjected to rigorous tests in operation, before being placed on the market, even if the main characteristics are already known, namely the rear-wheel drive electric motor with greater traction. fully loaded and with regard to capacity and equipment, the Ford vehicle has nothing to envy to the traditional Transit, which we have come to know in the diesel version.
Another fundamental feature, as we said, of the electric Transit is the connectivity with modern driving assistance systems that are of the latest generation such as the 360-degree camera, the intelligent speed control and the system that allows you to identify obstacles in advance.
The commercial vehicle will be available in up to 25 possible versions for bodywork, wheelbase, roof height and total mass. As for the weight, we are talking about a complete range of capacity classes up to 4.25 tons.
Being a fully electric vehicle, it has no harmful emissions into the atmosphere thanks to the so-called "eco mode" which also allows you to limit the maximum speed and reduce energy consumption by up to 8-10% in the event of sustained driving.
Charging the van is easy and comfortable because Ford has developed new battery charging services with dedicated public or home charging stations that are capable of fast charging from 15% to 80% of the battery in just 34 minutes.
Ford has also foreseen, finally, lower maintenance costs, thus allowing a saving on operating costs of 40% compared to diesel models.